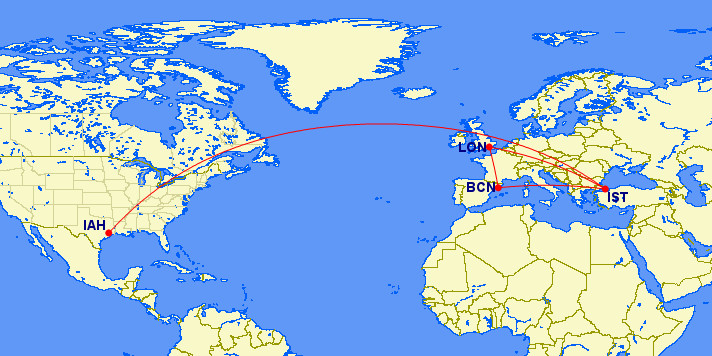 For over a year, Turkish Airways has offered a curious discount fare basis code: WV33XPC. The fare rules on this code basically say this: “You can take a free stopover, anywhere we route in Europe, but you’ll need to pivot our hub in Istanbul (IST). You’re also allowed a free open-jaw. You are limited to four transfers (aka: flight segments). Mileage accrual is 25% with us and 0% in partner programs.” Regular round-trip flights will transit via Istanbul.

The price of this fare is really good; about $760 for most destinations in Europe!

9/26 UPDATE: Per IHTFP  – “The fare allows 4 transfers, 2 in each direction, but only within Turkey (those provisions are ANDed). This isn’t the same as 4 flight segments: in theory you could have up to six, if you somehow found a routing that stops twice within Turkey each way.”

So where does Turkish Route?

Virtually all of Europe is covered by Turkish routes. In order for this to work you’ll need to setup your itinerary to connect via Istanbul (IST). For most regular round-trip fares, this is done for you if you have picked Turkish as your carrier on most booking sites.

NOTE: If the price increases when you are going to select the return leg, select the high price anyways, on the next screen it should find the correct price. I’m not sure why it does that sometimes.

NOTE: Some of these routes may have a long layover in Istanbul. If that happens, be sure to take advantage of the free Tour of Istanbul or Free Hotel stay that is offered by Turkish Airlines. More details on that, here [Free hotel stay or tour of Istanbul on Turkish Airways layovers].

What about the free stopover? How does that work?

This is really where the magic happens. The best way to explain it is by example. Let’s say that you wanted to visit London. You could pay $831 for the round-trip which will get you there with a 3-hour layover in Istanbul.

Let’s take a closer look at doing that:

If you remember from earlier, the fare rules say you can only get four transfers on this fare (before switching you to a more expensive fare).

Next, If you want to spend time in more cities, the obvious choice would be to turn the Istanbul layover into a stopover, since it’s free anyways. Doing so will give you the same routing, with the same segments, you’re just telling them that you want to spend a week in Istanbul (IST) before continuing on to London.

Here are examples of both itineraries:

You may be wondering, “Why is it almost $100 cheaper when we spend a week in Istanbul?”. The likely reason for that is UK Airport taxes are being avoided. In the first case, your itinerary is IAH-LON (so pay UK tax), but in the second case, your itinerary is IAH-LON-IST and you’re just in transit via London, “passing through”, but you’re just taking your sweet time to get to Istanbul. The segments, flights and routing are exactly the same, you’re just spreading out when you’re taking them. It’s funny, but that’s how it works.

If you want to experiment more, do this: Instead of IAH-LON-IST, do IAH-IST-LON. What happened to the price, and why? It should dawn on you that the order of your itinerary and the spacing of days can have profound effects on costs.

What about the open-jaw? How can that be applied?

An open-jaw is leaving from a different airport than you flew in on. Again, the best way to explain this is by example, so here we go.

Let’s say that you wanted to visit Barcelona (BCN), Istanbul (IST) and London (LON). Let’s try to do it as two free stopovers in each city.

Five segments here, and the rules say four. We’ve broken a fare rule, and that means this fare will not be presented to you. Instead, you will be priced with a different fare basis, one that allows more than four segments or has less restrictions. Probably on a different airline. This is a bad thing, because you’re now working under a whole new set of fare rules, and the fare will (likely) be much more expensive; so let’s avoid that situation.

We need to keep the number of segments at a maximum of four, and the only way to do that is to open-jaw one of these transfers. Let’s try again, but let’s open-jaw the Barcelona to London segment.

Four is good. We have an additional problem though; how do we get from Barcelona from London? Probably the most convenient way is to buy a one-way ticket to re-position ourselves in London before our flight leaves, it’s either that or take a train, or teleport. If we land in Barcelona on Oct 23 and Leave London on Oct 29, then we should probably book a one way flight from BCN to LON on the 26th. Iberia will get you there for $71 USD. [Orbitz link to Iberia itinerary].

Is $849 a good price for an itinerary that visits the UK, Spain, and Turkey? Well, when you consider for a second that a plain-old round-trip on Turkish to London costs $831, I think maybe… just maybe, you’re doing alright. I dunno. 🙂

Did you find this any of this useful? Give us your support by using our links when you start your airfare or hotel booking process or share this blog post on facebook or twitter.

Big thanks to Imran Kidwai for sending me a tweet about BCN. I would not have realized that this code is used on nearly all of Turkish’s European routes had he not contacted me. While I had mentioned this fare code in previous posts, I was thinking it was only for Greece, Italy and Turkey. Discovering that the rule covers almost all of Europe was a big revelation.

That said, everyone is free to send me a note on Twitter, and I would like to hear from you all!

@EscapeHouston Found a flight to BCN that allows stop in IST for $799 on Turkish.
— Imran Kidwai (@ImranKidwai) September 23, 2014

COVID rules and restrictions vary depending on destination.

COVID rules and restrictions vary depending on destination.

Southwest Airlines to begin flights from IAH for the first time in 16 years https://www.click2houston.com/news/local/2021/04/12/southwest-airlines-to-begin-flights-from-iah-for-the-first-time-in-16-years/?utm_source=twitter&utm_medium=social&utm_campaign=snd&utm_content=kprc2