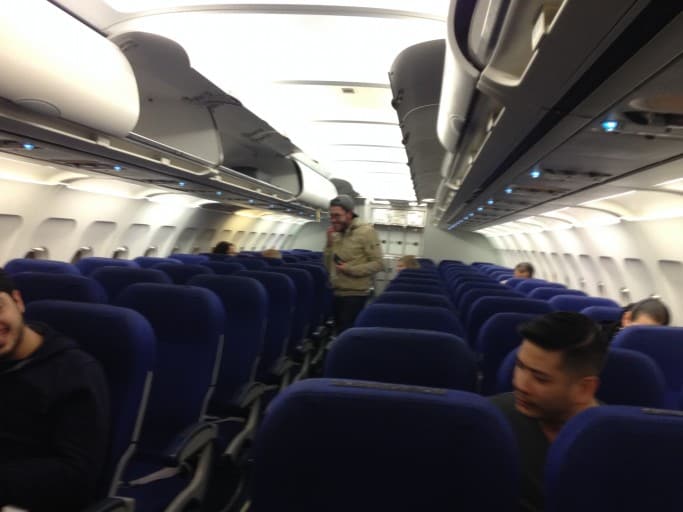 As some of you may already know, I’ve recently booked and completed a round-trip flight on VivaAerobus. The flight was from Houston to Cancun. In my case, I was going with some friends to a music festival in Playa Del Carmen and Tulum. I’ve written a little bit about the problems that I had with this airline a few months ago here: [VivaAerobus is leaving a bad impression on me…].

Several of you have asked me to detail what my experience on the flight was so this post will cover Flight Booking and Fees, Reservations, Check-In, Boarding, and In-Flight experience. I think it’s fairly safe to say that Viva is consistently offering the lowest price for a round-trip flight from Houston (IAH) to Cancun (CUN). At the time of this writing the round-trip flights are $141 after adding in their unavoidable fees.

I’ve attached the “Payment Options” screen that they’re currently presenting. Want to save a little money by using a Debit card? Well, you do have a Banamex, Banorte or BanRegio debit card right? Riiiight.

As for any other optional fees, I’m going to make this simple and say that any fee on Viva that can be avoided, should be avoided.

When I had originally purchased my ticket with Viva my flights were on a Saturday. Viva would later decide that they would no longer operate flights on the route on Saturday, which meant that my flights would be changed one whole day earlier for the departure and one day later for the return. Viva would make this change to my itinerary without any notification to me. Luckily, someone that follows this blog sent me a private message and I was able to see the change before I had booked my hotel accommodations.

I called Viva when I became aware of the change to see what my options were. They were described as such.

From my experience with Viva, your reservation is something you can’t count on. Check your itinerary often, online via the VivaAerobus website.

Here is one of the areas where Viva didn’t suck, actually from this point on Viva did quite good. Check-In was painless because, as it turns out, we were basically the only ones that would be on the plane. One of the people I was traveling with has an aversion to packing light so her checked bag was over the 15kg limit. Keep in mind that 15kg isn’t a lot; it’s 33 pounds. Most airlines allow 50 pounds. If you are over the limit, expect to be charged $20 – $40 at the check-in counter. In our case, the agent waved the fee since I didn’t have a checked bag. She took my carry-on as checked, so the total weight of both bags combined was under the limit.

Terminal D security at IAH was quick and easy. Significantly faster than trying to get through security at C or E.

One thing that we all found amusing, our actual ticket to get on the plane was hand written. Here’s a screenshot.

Viva doesn’t assign seats, and the boarding process was kind of a mess. Nearly everyone just got in the VIP line. Not that it really mattered, since there were only about 40 people on the flight and about 10 of them were people I was traveling with. However, if you paid for express boarding, this will not be a plus.

This is another area where Viva did well. Our in flight experience was great and the attendants were nice and professional. I have no issues at all with Viva here. It should be noted that we were flying on a mostly empty plane. Everyone had their own row to lay across. The jet was a 3/3 seat configuration. My first impression of VivaAerobus is a negative one. I’ve heard from numerous people that were seriously inconvenienced when Viva changed their schedules without notification. I also take issue with the unavoidable “Fee to pay for your ticket”, it stinks of a desperate attempt to mislead and deceive potential customers.

That said, there are many bright points going for Viva’s Houston/Cancun route. First, the fact that very few people are flying Viva means that you’ll have a row to yourself on the way there, and on the way back. Expect this to change as more people start using Viva, but as of right now it’s basically a private jet for you and your friends where everyone can take up three seats. Second, and mainly due to the lack of passengers, check-in was a breeze. I remember seeing all of the long lines at the other airline’s check-in counters, while we were able to walk right up to Viva’s and take care of business. Finally, the price point is about 1/3 of the cost compared to cheapest flight on United, even after adding in the “fee to pay for your ticket”.

My friends that were lucky enough to book flights that didn’t require a schedule change from Viva really like the airline and say they would use them again. As for me, I’ll probably give them a second chance in a year or so. I really want to see if they can fix their problems and provide a good service. If Viva can keep their flight schedules solid then this will probably end up being the route that brings some real competition for Houston/Cancun flights.

If you’re thinking of booking Viva’s Houston/Cancun flight, you should do so knowing that there’s a good chance that there will be problems. Check your itinerary online every day to make sure there are no surprises. Also, don’t expect Viva’s customer service to care about any inconveniences caused by having your departure or return flight dates changed to a different day — they provided a dismissive tone during the time I called in to inquire about the change they had made to my itinerary. Generally speaking, it seemed like the customer service representative didn’t seem to care about how changing the day of arrival and departure could seriously break someone’s travel plans.

What Viva is currently offering isn’t something I can recommend to readers of this blog at this time. I’ll eventually fly them again, and I’m hoping that by then they’ll have a solid flight schedule that doesn’t leave people scratching their heads at the last minute.